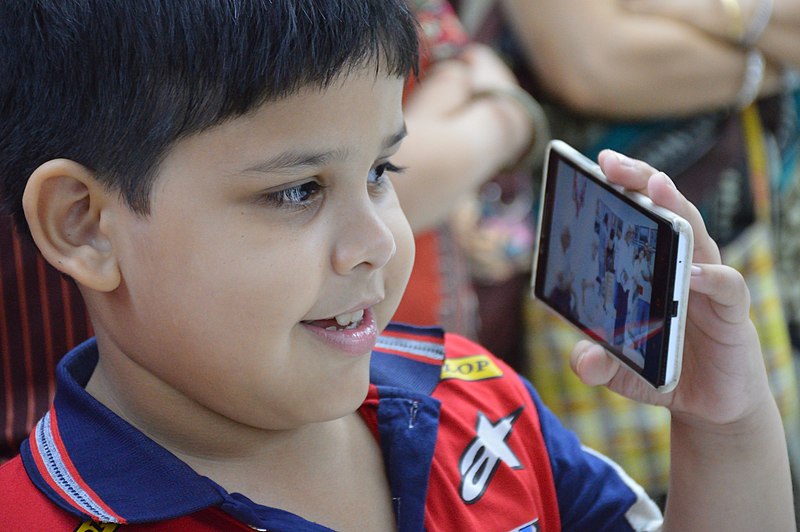 1. Children Are More Vulnerable.
As with most toxic influences, children are more vulnerable. This is due, in part, to less dense protective body tissues, higher levels of tissue hydration, a less developed immune system, and a more sensitive nervous system. All this contributes to a greater vulnerability to electromagnetic radiation.

2. Cell Phone Safety Certification Is Outdated and Insufficient for Children.
The current cell phone safety certification process is outdated and understudied. It uses a plastic model of the head called the Specific Anthropomorphic Mannequin (SAM), and was designed to represent the top 10% of U.S. military recruits in 1989. This model underestimates the radiation absorption rate for current day cell phone users, especially children. Cell phone radiation exposure and absorption for smaller heads than SAM will be significantly higher.
Also, SAM uses a fluid with the general electrical properties of the head but it cannot indicate different absorption rates of specific brain tissues nor reflect different absorption rates for children and small adults.

3. Current Certification Is Not Relevant for Present Day Exposures.
The SAM model also does not take into consideration modern exposure levels from the abundance of connected devices in our world and the throngs of cell towers, WIFI routers, and small cell antennas. Clearly, a new certification process is needed that addresses different modes of use, exposures, head sizes, and tissue properties.

4. Proximity Matters.
With 5G, small cell base stations will need to be placed every 500-900 feet apart (or less). This means that for many people, they will be placed just outside of their homes, creating higher radiation levels within people’s living environments. Again, children will be at greater risk at closer proximity. Cell towers are also being placed on or near some schools and hospitals. Add to this the addition of WIFI signals and exposure increases dramatically.
In some areas, such as Houston, TX, telecom companies are pushing for a variance in how close cell towers can be to private homes. In the case of Houston, the ordinance says towers have to be 150 feet from residential areas. They are now pushing to have them as close as 35 feet away. Again, this would dramatically increase exposure.

5. The Australian Study
An Australian study found that children living near TV and FM broadcast towers, which emit similar radiation as cell towers, developed leukemia at three times the rate of children living over seven miles away (link below).

6. The German Study
This ten year study conducted from 1994-2004, revealed that living within 400 meters (quarter mile) of a Cell Tower increased the risk of developing cancer by 300%. Those within 100 meters were exposed to radiation at 100 times normal levels.

7. 5G / Internet of Things Poses Threat to Childhood Development:
There is growing concern about screen addiction and its effect on the brain, the larger nervous system, the adrenal system, social development, and more. Already, our children are exposed to screens from morning to night and with the rise of additional smart devices, children will be further inundated with information which is profoundly disconnected from reality and from their own natural state of being. The documentary Screenager goes into this at some length. 5G / IoT promises to expand unhealthy digital influences in a profound fashion. Click here to watch the Screenager trailer.

8. Education and Action
Clear evidence indicates that the closer towers or antenna are, the greater the health risk, especially to children. Unfortunately, churches, schools, fire stations, and other buildings are increasingly erecting cell phone towers or antennas because cell phone companies are willing to pay rental fees of hundreds or even thousands of dollars a month. 5G is set to increase exposure exponentially. As parents, and citizens, we are wise to become educated on this topic and address our representatives. Our government, if not the telecom companies, MUST understand this risk and behave responsibly by keeping towers/antennas far from children in residential areas and schools.
The excellent documentary Generation Zapped is a good resource. This is available to stream on multiple platforms and post screening discussions can be found on Youtube.

Also, HERE is a sample state resolution regarding wireless radiation in schools. Consider sending this to your state representatives to support studies on wireless health impacts and implement appropriate changes in our schools.